Lau has been with the HEI family of companies since 1984 and has held the top post at HEI since 2006. She served as president and CEO of American Savings Bank from 2001 to 2008, and prior to that, held key leadership positions at HEI and Hawaiian Electric.

«With years of experience in our companies and in the communities we serve, Scott and Shelee have helped lead Hawaiian Electric’s clean energy transformation and are committed to the decarbonization of our economy and the health of our communities,» Lau said. «They understand what’s at stake for Hawai’i and how to work successfully with stakeholders and community partners. I am excited about the future of our companies under the leadership of Scott, Shelee and Ann. Together with Greg Hazelton and Kurt Murao, HEI’s chief financial officer and general counsel, respectively, they will carry forward our mission to be a catalyst for a better Hawai’i.»

The new leadership team combined has more than 75 years of experience with the HEI companies.

Seu was named president and CEO of Hawaiian Electric in February 2020. Under Seu’s leadership, the company achieved a renewable portfolio standard (RPS) of nearly 35 percent, surpassing the 2020 state goal of 30 percent.

Hawaiian Electric continues to be a national leader in rooftop solar adoption and the use of electric vehicles, helping to reduce carbon emissions throughout the state economy.

Seu, 55, is a graduate of Kamehameha Schools and received his bachelor’s and master’s degrees in mechanical engineering from Stanford University. He joined Hawaiian Electric in 1993 and has held key leadership positions across the company, including in the areas of environmental management, customer programs, renewable energy development, electric system operations and community relations. He has been at the center of Hawaiian Electric’s commitment to high performance, efficiency improvement, environmental sustainability and community service.

Earlier this year, Hawaiian Electric began operating under a performance-based regulation (PBR) framework, among the vanguard in the U.S. energy industry. This new business model seeks to ensure alignment of the company’s priorities with customer needs and broader societal goals like clean energy. With this framework in mind, Seu and his leadership team developed Hawaiian Electric’s new five-year strategic plan, with goals to create customer value, strengthen the company’s foundation and build a stronger Hawai’i.

«Anyone who works with Scott knows he’s committed not just to getting things done but to finding solutions that are fair, equitable and practical,» said Tom Fargo, chairman of the board of HEI. «That’s what we’re talking about when we say we want HEI to be a catalyst for a better Hawai’i. That’s why Scott is the person to lead the company at a time when Hawaiʻi’s energy independence is on the horizon and there are so many opportunities to help empower our communities.»

Seu was on the core team leading the implementation of the groundbreaking 2008 clean energy agreement that was the product of a unique partnership of the utility and the state and federal governments to accelerate Hawaiʻi’s transition off imported fossil fuels.

For the past three years, he has helped lead the working group organized by Hawaiian Electric to work with community members in the Koʻolaupoko region of Oʻahu to advance resilience planning.

«I’m humbled and honored to be selected as the next president and CEO of the HEI family of companies, and I mahalo Connie, Tom and our board of directors for entrusting me with this responsibility to serve our customers, our employees, and our shareholders,» Seu said. «HEI and its operating companies, Hawaiian Electric, American Savings Bank and Pacific Current, make up one of Hawaiʻi’s largest corporations, touching nearly all of Hawai’i’s population. With that comes an obligation to positively impact Hawai’i’s future and I’ll do my best, working with our entire team, to support the well-being of our communities.»

Seu is board chair of Hale Kipa, one of Hawaiʻi’s leading youth services organizations, and serves as a board member for Teach for America Hawaiʻi and the Electric Power Research Institute. He also supports the University of Hawaiʻi at Mānoa’s College of Engineering as a member of the Dean’s Council.

Kimura was instrumental in developing Hawaiian Electric’s 2015-2020 transformation strategy, which helped guide the leap from a traditional utility model to a transformative clean energy leader in the industry. She co-led the team that executed the transformation plan and helped set the framework for the company’s culture to become more nimble, innovative and focused on the needs of customers. During this period, the company’s customer satisfaction improved from one of the lowest in the industry to the top third.

Kimura has worked to develop more constructive and equitable markets for renewable resources and more collaborative relationships with stakeholders, including those representing the environment, clean transportation, utility-scale renewables, and the rooftop solar industry. She has overseen an expansion of programs that helped hasten the pace of residential adoption to more than 90,000 private rooftop solar systems today and large-scale renewable resources that have more than doubled over the last five years. Most recently, she has led a company group working with nonprofit and government agencies to address the needs of low and moderate-income customers, especially during the pandemic.

«Shelee is a roll-up-her-sleeves kind of leader and problem-solver who comes to the job with a wealth of experience inside and outside the company,» said Tim Johns, chairman of the Hawaiian Electric board of directors. «She understands the critical role the company plays in Hawaiʻi, not just keeping the lights on, but providing leadership to tackle the challenges of climate change in ways that are equitable and responsive to communities.»

«It is a true honor to be selected to lead Hawaiian Electric in this critical time,» Kimura said.  «Like many in Hawai’i, I was raised with a sense of responsibility and stewardship for this incredibly special place. I step into this role with humility and a deep sense of kuleana to Hawai’i’s future, the communities we serve and our dedicated employees who serve them. As we pursue our mission, we can help create a sustainable, equitable and thriving Hawai’i, and I look forward to working with many others to do just that.»

Before joining Hawaiian Electric, Kimura spent 10 years at HEI, leading corporate finance and investments, investor relations and strategic planning. From 1996 to 2004, she worked in the audit, advisory and consulting practices at Arthur Andersen and KMH LLP.

Kimura has received numerous recognitions for her business, leadership and community contributions, including the Clean Energy Education and Empowerment (C3E) national business award, Hawai’i Business Magazine’s 20 for the Next 20, and Girl Scouts Women of Distinction.

Lau’s career with HEI and its subsidiaries has spanned numerous leadership roles and included spearheading key initiatives that have transformed the companies. In 2008, she signed the agreement with the governor and other leaders that set the course for Hawaiian Electric’s clean energy transition as part of the Hawaiʻi Clean Energy Initiative. She also led the transformation of American Savings Bank from a thrift institution to a full-service community bank that is now the third largest in the state.

Lau, 69, was central to developing and guiding HEI’s mission to be a catalyst for a better Hawai’i, a mission rooted in HEI’s belief that its success and Hawaiʻi’s are inextricably linked. HEI’s commitment to advancing the health of the state’s environment, economy and communities has made the recent growth in investor and other stakeholder focus on environmental, social and governance (ESG) considerations a natural fit. The company has become a recognized ESG leader, and was one of the first in Hawai’i to focus on ESG in its reporting and to outline its ESG priorities, including decarbonization and economic health and affordability of Hawaiʻi.

«Connie provided steady and thoughtful leadership through a time of unprecedented change in the energy and banking industries, but more than that, she was always asking ‘What’s next?’ and anticipating the next challenge,» Fargo said. «To have someone who leads a Hawaiʻi company nationally recognized for their expertise in such diverse fields as energy, cybersecurity and finance is really remarkable, and it’s a tribute to Connie and the team she has built.»

Lau was named 2011 Woman of the Year by the Women’s Council on Energy and the Environment. She was recognized as one of U.S. Banker’s 25 Most Powerful Women in Banking for 2004, 2005 and 2006. Lau chairs the Military Affairs Council of the Chamber of Commerce of Hawaiʻi and serves on the executive committees of the Edison Electric Institute and Hawaiʻi Business Roundtable.

She is a member of the board of directors of Matson, Inc., Associated Electrical & Gas Insurance Services, and Asia Pacific Center for Security Studies. Lau chairs the boards of Punahou School and the Consuelo Foundation.

The Hawaiian Electric Industries, Inc. (HEI) (NYSE:HE) family of companies provides the energy and financial services that empower much of the economic and community activity of Hawaiʻi. HEI’s electric utility, Hawaiian Electric, supplies power to approximately 95% of Hawaiʻi’s population and is undertaking an ambitious effort to decarbonize its operations and the broader state economy. Its banking subsidiary, American Savings Bank, is one of Hawaiʻi’s largest financial institutions, providing a wide array of banking and other financial services and working to advance economic growth, affordability and financial fitness. HEI helps advance Hawaiʻi’s sustainability goals through investments by its non-regulated subsidiary, Pacific Current. For more information, visit www.hei.com. 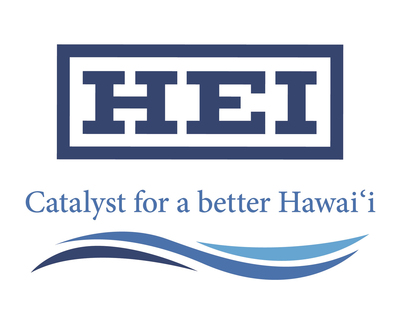