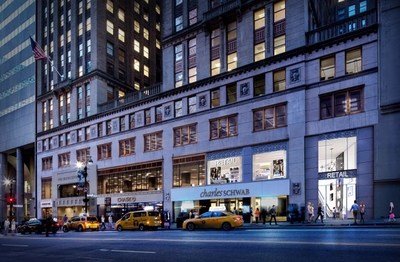 «We are pleased to continue our long term relationship with Charles Schwab at One Grand Central Place,» said Thomas P. Durels, Executive Vice President, Real Estate for ESRT. «Charles Schwab recognizes the value and convenience to their customers of being located directly across from Grand Central Terminal.»

One Grand Central Place  is also home to JPMorgan Chase Bank and as ESRT announced in September 2019, a new location for First Republic Bank.

Forward-Looking Statements
This press release contains forward-looking statements within the meaning of the Federal securities laws. You can identify these statements by our use of words such as «assumes,» «believes,» «estimates,» «expects,» «intends,» «plans,» «projects» or the negative of these words or similar words or expressions that do not relate to historical matters. You should exercise caution in interpreting and relying on forward-looking statements, because they involve known and unknown risks, uncertainties and other factors which are, in some cases, beyond ESRT’s control and could materially affect actual results, performance or achievements. Such factors and risks include, without limitation, the current public health crisis and economic disruption from the COVID-19 pandemic, a failure of conditions or performance regarding any event or transaction described above, regulatory changes, and other risks and uncertainties described from time to time in ESRT’s and ESROP’s filings with the SEC, including those set forth in each of ESRT’s and ESROP’s Annual Report on Form 10-K for the year ended December 31, 2019, under the heading «Risk Factors». Except as may be required by law, ESRT and ESROP do not undertake a duty to update any forward-looking statement, whether as a result of new information, future events or otherwise.