DALLAS, Oct. 6, 2021 /PRNewswire/ — Lucky’s Hot Chicken, the Texas-owned-and operated hot chicken restaurant concept announces a new partnership with star collegiate Wide Receiver, Reggie Roberson, Jr. Lucky’s will underwrite all the hot chicken Reggie can eat for the rest of the football season. The restaurant will also deck Reggie in swagged-out gear, host him and his friends for celebratory meals, and debut a limited-edition combo comprised of Reggie’s favorite menu items. 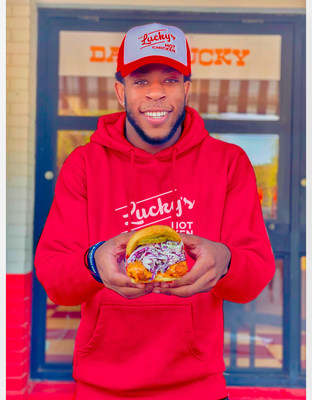 «We’re huge SMU Mustangs fans and proud sponsors of the athletic department. When the new regulations went into effect, it opened up exciting opportunities for us to work with the players,» said Lauren Land, Vice President of Marketing & Communications at Vandelay Hospitality Group. «Reggie is a unique and exciting player. We’ve had our eye on him and are thrilled to partner with him this season. He has such a bright future ahead.»

Turns out, Reggie is a Lucky’s fan too and jumped at the opportunity to partner with the restaurant. «I’m very excited to be teaming up with Lucky’s this season,» said Reggie Roberson, Jr. «They value high-quality food and exceptional service and I love the way they bring a fun and creative vibe to their menu items. It’s really something that makes them stand out. Their support of me means a lot and I’m excited for what’s in store!»

Through January, Lucky’s Hot Chicken will feature «The Reggie Roberson, Jr. Combo,» which is Reggie’s favorite spicy, limited-time winning combo: the Big Lou with «Feelin’ Lucky» Jumbo Tenders with a side of Howlin’ Fries, washed down with Reggie’s favorite, Soft Serve Ice Cream.

Lucky’s Hot Chicken’s retro diner vibes and trademark heat levels were an instant hit among locals, with fans flocking in from out of state, forming lines around the block, much in thanks to its buzzworthy social media presence. The group opened a second location in April of this year across from Southern Methodist University on Hillcrest Ave and McFarlin Blvd (6309 Hillcrest Ave) – right in the Mustang’s backyard.

The concept will open a dozen Lucky’s Hot Chicken locations in Texas within the next year’s time.