OAKLAND, Calif., Oct. 7, 2021 /PRNewswire/ — OhmConnect, the energy company that rewards people for using power smartly, today announced that San Jose, California, is the winner of its City Energy Challenge. The City of San Jose earned the coveted title of «Energy Saving Superhero» by signing up the most customers to OhmConnect’s free energy saving service, and installing the most smart thermostats (e.g., Nest, Ecobee, and Emerson) in an effort to help prevent rolling blackouts, ultimately winning the $50,000 prize. 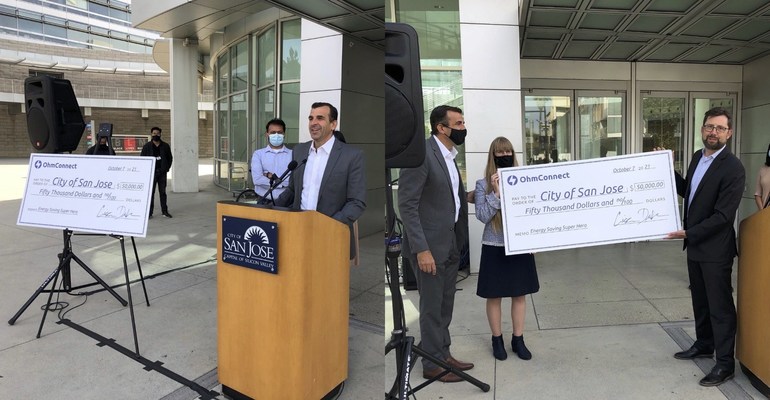 San Jose bested worthy efforts from cities including Oakland, Fresno, and Bakersfield to take home the top prize. All four cities contributed to saving energy when it was most needed by the grid, helping to prevent blackouts during California’s hottest summer on record.

«I am so proud of our residents,» said San Jose Mayor, Sam Liccardo. «We welcomed 3,505 new OhmConnect users into our community of energy savers, and together with other OhmConnect users throughout the state, we helped save more than 1.5 GWh of energy — the equivalent of taking more than 900,000 homes off the grid for an hour. This shows the power of each of us taking part in the clean energy movement to help get California to net zero emissions by 2030.»

While California’s grid operator issued eight Flex Alerts this summer — the most in one year since 2006 — there were zero rolling blackouts, thanks in part to the conservation efforts of OhmConnect users in San Jose, who installed a record number of smart thermostats this summer, which OhmConnect provided at no cost to new users. OhmConnect users across the state saved a total of more than 1.5 GWh of electricity this summer to relieve stress on the grid – the equivalent of taking more than 900,000 homes off the grid for an hour.

«The City Energy Challenge shows us what can be accomplished with a clear objective and incentives,» said Cisco Devries, CEO of OhmConnect. «San Jose is a shining example of what we want to see across California: residents using energy more strategically so that they save money while alleviating stress on our grid. Enabling everyone to easily do their part is how we’ll achieve a clean energy future.»

OhmConnect, winner of the 2021 Fast Company World Changing Ideas Award, was founded in 2014 to improve the lives of people and the health of the planet by reimagining the way energy is (collectively) used. Today, OhmConnect enables hundreds of thousands of customers to reimagine how they use energy, and to be rewarded for timely, smarter, home energy use. OhmConnect makes it possible for customers to use clean energy without buying expensive solar-powered systems or changing energy providers. The company pays its users for saving energy when the grid is at risk of using dirty power. OhmConnect has provided Californian consumers with more than $15 million of rewards for saving energy. Customers of the three major California electricity suppliers – Pacific Gas and Electric (PG&E), Southern California Edison, and San Diego Gas & Electric – can sign up with OhmConnect for free at ohmconnect.com. Follow OhmConnect on Twitter @OhmConnect, see the OhmConnect blog or check them out on Facebook and LinkedIn.