MILLDALE, Conn., Sept. 28, 2021 /PRNewswire/ — On Saturday October 16, Rentschler Field will be more than just the venue for the UConn Huskies vs. the Yale Bulldogs, it will be the location for the debut of Husky Hops, a delicious new hazy IPA which is the result of a partnership between the University of Connecticut Division of Athletics and Kinsmen Brewing Co. of Milldale, CT. 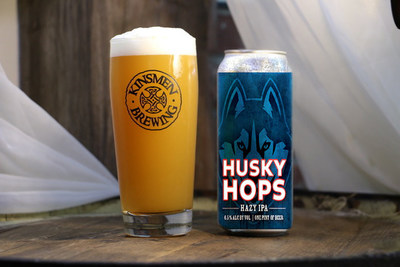 «Husky Hops is a great tribute to our Husky spirit,» said David Benedict, UConn Director of Athletics. «We are particularly proud of being able to partner with a growing local company and participating in an industry which is growing throughout Connecticut and the region.»

Husky Hops will be available at concession stands at Pratt & Whitney Stadium at Rentschler Field (including special kiosks located in the UConn Alumni section of the stadium) as well as a kiosk at the entrance to the Gampel Pavilion and at concession stands at the XL Center and across multiple sports, including baseball, soccer and hockey. Additionally, the new brand will be sold at all on-campus facilities that sell beer.

Former UConn Huskies Football Co-Captain and Kinsmen manager, Jeff Delucia, was instrumental in forming this new partnership. «It’s an honor to be part of such a great celebration of Husky spirit with such a phenomenal IPA brewed by Kinsmen,» DeLucia said.

The new IPA is described as «medium bodied yet refreshing» with a base made from clean American pilsner malt and fluffy malted wheat with intense notes of pineapple, white peach and tangerine. «We had been discussing the idea of a special Husky craft beer with the University for quite a while,» said Kinsmen co-owner, Bruce Staebler, «and we are so proud of the product developed by our team.»

The Husky Hops label is graphically arresting and all-husky, featuring a close-up of the full front face of Jonathan, the University’s vaunted canine icon, with his penetrating, piercing eyes in muted shades of dark blues offset by the product’s name in bold white letters outlined in red.

«We’ve used our experience and experimentation to create a definitive Kinsmen hazy IPA that is perfect for enjoying while watching a UConn game,» said Bob Bartholomew, Kinsmen’s Operations Manager, «We use a blend of our favorite American hops to create the punchy, clean, juicy flavor profile of Husky Hops.»

Sustainability is also a large part of the Kinsmen brewing process. «Our spent grain is donated to a local farmer who uses it to supplement some of the feed for his livestock while our solid fermentation waste is given to Blue Earth Compost, where it’s recycled into compost for local gardens.»

«Kinsmen Brewing Co. is a unique place,» said Greg Caucci, Kinsmen’s President and co-owner, «While many craft breweries are emphasizing their wholesale business, Kinsmen is all about a more curated beer experience which can be seen in all of our spaces. This includes our taproom which creates a rustic family atmosphere in a beautiful historic building, our event space and even our own in-house craft pizza venue, aptly named Sauced. It’s a combination of craft beer heritage with a modern twist. We’ve taken this Kinsmen experience and blended it with UConn Athletics to create a whole new experience that can be enjoyed on-site at the game.»

Kinsmen Brewing Co. in Milldale, CT is central Connecticut’s fastest growing craft beer brewery, featuring a spacious rustic taproom with a large fireplace, a long customer-friendly bar, a large event space and its own in-house pizza restaurant, Sauced. But, most of all, it offers some of the most delicious craft beers and IPAs available anywhere. | greg@kinsmenbeer.com | www.facebook.com/kinsmenbrewing | Twitter @KinsmenBrewing | Instagram @KinsmenBrewing.